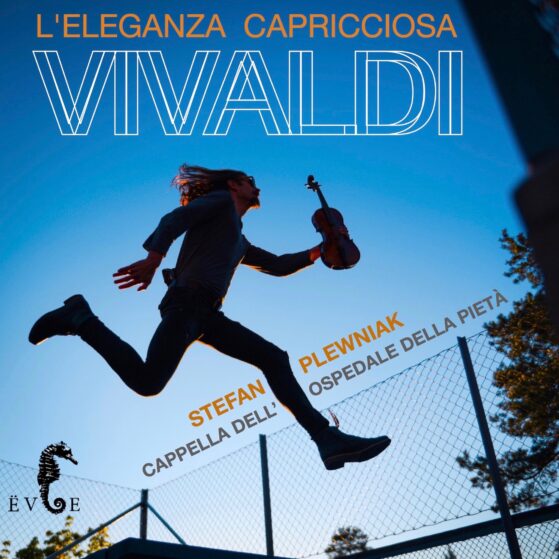 It is like rock and roll for a violinist to discover his music. So many different patterns within a definite form. So much passion in Vivaldi to push our instrument to its limits, as far as he could.

For me, this music expresses the joy, sun, excitement, vitality, passion, and all the feelings and experiences you encounter in Venice, including the light, different smells, colours of the sky and buildings, the sounds of the crowd, the special energy of the people.

Vivaldi’s music is strongly connected to the Carnival. Even if mainly operas were written for that period, the music business was strongly focussed on this, the most festive time of the year. I feel that instrumental music was no less affected by this Carnival energy than opera.

And thus, Stefan Plewniak’s anthology is inspired by the astounding variety of the 230 violin concertos written by Vivaldi. It reflects a very personal choice made by the Polish violinist and conductor according to how he was touched by their diverse character, their virtuosity, varying personality and expressivity.

Two of them, RV 237 and RV 242, both in D minor, were composed for Vivaldi’s friend Johann Georg Pisendel (1687-1755). Considered one of the greatest German violin virtuosos of the late Baroque period, Pisendel was well acquainted with Telemann, Graupner, J. S. Bach. Moreover, he was concertmaster of the famous court orchestra of the Electorate of Saxony in Dresden. Part of the Elector’s entourage visiting Venice in 1616/17, Pisendel became a great friend of Vivaldi’s, who dedicated him a number of sonatas, concertos and a sinfonia. The first movement of the Concerto RV 237 – with the solo part written in the seemingly free and improvised style of a capriccio – , and the wild third movement of RV 242 exhibit Pisendel’s outstanding technical craftsmanship, the boundless freedom and overwhelming vitality of his playing. They are still a great challenge and inspiration for any soloist today.

The Concerto in C, RV 177, was selected for its operatic dramaturgy and the way in which the main themes are presented. The memorable rhythmical pattern that runs through the first movement of RV 177 shows the clockwork mechanics of an Italian opera overture that seems to look far ahead into the future, even foreboding Rossini’s most popular specimens from this genre. And indeed, Vivaldi evidently sensed that this propelling quality was befitting for an opera when he reused it as an opening to L’Olimpiade. The second movement, on the other hand, brightens up the atmosphere with a hauntingly beautiful melody, which may well be imagined as an opera aria, while in the third extremely energetic moments are interspersed with graceful solos.

Similar striking contrasts and narrative moments characterize the Concerto in E minor, RV 273, presumably one of Vivaldi’s last concertos for violin. Whereas in the first movement some of them clearly evoke the style of the Four Seasons, the second is pervaded by an unusually heart-rendering sadness, a mood which the last movement managest o disperse only in part.

The Concerto in D, RV 208, finally, is one of the rarest gems amongst Vivaldi’s violin concertos. Its title „Grosso Mogul“ possibly refers to an opera libretto popular at the time, even though Vivaldi himself used it only two decades later for his opera Argippo, produced

in Vienna and Prague in 1730. The cadenzas in this concerto are unique in that Vivaldi fully wrote them out in the first and third movement, while the second is improvised in a gipsy or pseudo- Indian style alluding to the work’s exotic title.

Until the late 20th century, Vivaldi had been remembered only for his Four Seasons, some other violin concertos, maybe the Gloria. Although it is true that he wrote about 500 concertos, he was in his time an extremely popular composer of nearly 50 operas, which after his death were soon forgotten and only very recently rediscovered one by one.

But from the music presented on this CD it is evident that Vivaldi himself did not see any particular boundary between the genres: his instrumental music can be songlike, even grand and operatic, while we realize today just how many of his vocal works contain beautiful lines and strings of ornaments that might as well suit the masterful bowing of an excellent violinist. Naturally, the baroque affetti – the standardised basic emotions generated in the listener by a particular type of music – determine both Vivaldi’s instrumental and vocal oeuvre. It is Vivaldi’s free and imaginative play with the affetti, however, the feeling of sunlight and elation, which set him apart from so many other composers and make his music so unique and enjoyable.